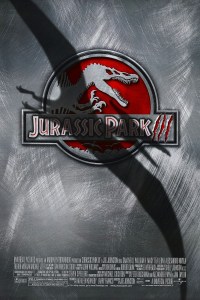 Jurassic Park III has some familiar faces traveling to a different island, but one that is also inhabited by a plethora of prehistoric wildlife.

While para-sailing near Isla Sorna, a sister island to Isla Nublar from the original Jurassic Park, with his stepfather, young Erik Kirby (Trevor Morgan) gets detached from the boat and has to land on the island. Back in the US, Dr. Grant (Sam Neill) is still working with dinosaurs and has gained some notoriety for his adventures during the first film. When approached by Mr. (William H. Macy) and Mrs. (Téa Leone) Kirby and promised a huge paycheck under false pretenses, their crew lands on the island for a rescue mission. Obviously the dinosaurs are not pleased by the new visitors.

Make no mistake, I know Jurassic Park III is a pretty bad movie but ever since I was really little, I’ve loved dinosaurs. Jurassic Park III‘s subtitle may as well be “let’s see how many dinosaurs we can cram into this thing” because at every turn there’s a dinosaur. The plot is paper thin and the film kindly asks you to disregard using any logic in what it’s showing you, but dinosaurs, man! DINOSAURS!

While it’s a totally unnecessary sequel that was an obvious cash grab and scheme to sell toys, Jurassic Park III at least brings back Dr. Grant and Ellie Sattler and it tries its best to form a continuation of the characters after the events of the first two films. The upcoming 4th film in the Jurassic Park series may be even more of a cash grab, turd of a film, but I’ll still probably see it. The magic of this film isn’t that it tries to be as good as Spielberg’s films, it’s that it knows that people love dinosaurs and expands on it.

The production values are actually fairly high Jurassic Park III, the special effects notably. I hadn’t watched the film in awhile and was thinking the CGI dinos could end up looking like SyFy’s incredibly crappy movies but they look realistic. There is actually a scene in a river with the main “villain” dino, the spinosaurus, and they use an animatronic instead of CGI and the CGI versions look more alive.

I give it 3 real-life spinosaurus skeletons out of 5.