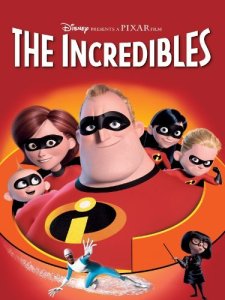 Two former superheroes forced into retirement are called back into action with the whole family in The Incredibles.

Bob (Craig T. Nelson) and Helen (Holly Hunter) Parr, also known as Mr. Incredible and Elastigirl are former Supers now living as civilians to hide their identity. They have three children, Violet, Dash, and Jack-Jack. When Bob and friend Lucius Best (Samuel L. Jackson) aka Frozone start getting back into the Superhero game at night, they are approached for actual Super missions again by a woman named Mirage. One mission on an island ends up being a trap, masterminded by former Mr. Incredible fan and wannabe sidekick Buddy (Jason Lee), now known as Syndrome. When Mr. Incredible is in trouble, it’s up to his Super family to come to his aid and together they must save the day.

It’s films like The Incredibles that make a studio like Pixar special. It’s a film that could have easily been a cheap thrill with no heart just to push toy sales but it is really something special when you give it a closer look. The conflict of a restricted superhero working a lousy day job and having to hide his secret identity is simple genius. The fact that Bob sees his actual identity more as Mr. Incredible than Mr. Parr is also handled with great care and heart. The family situation of Supers is also simple but it works so well that it’s easy to gloss over just how perfect it works here.

Brad Bird, who was also the creative force behind the also amazing Iron Giant, has a real knack for setting up a story that seems so simple but is made remarkable by the tangible things like the characters, the story, and the art/animation but what identifies his films as masterpieces is the more esoteric “soul” of the film that instantly connects you with the characters and plot. We don’t need origin stories here, we just need to know superheroes exist. We relate with the issues that the Parrs have to deal with even though we aren’t Supers. Heck, we even understand why someone like Syndrome would go to such lengths to act like a Super, and his means aren’t necessarily evil so much as misguided. The Incredibles does all of this and makes it look easy.

To match the level of the film itself, the blu-ray presentation blew me away. I had long owned the DVD version and enjoyed it, but the blu-ray looks and sounds 10 times better than I remembered. The Incredibles isn’t a film that I could see myself watching too often, it’s the type of film that I regard as a special treat every few months. Long enough between viewings so that the experience is fresh and that rush of excitement is almost new each time. The Incredibles should be the film that Pixar is remembered for.

I give it 5 classic Mr. Incredible posters out of 5.
(I prefer his blue suit, actually)