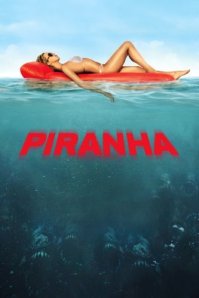 Piranha has, what else, piranhas attacking a lake during spring break.

A fisherman (played by Richard Dreyfuss in a glaring Jaws homage) on Lake Victoria is disturbed by an earthquake that unleashes whirlpool and a prehistoric relative of the piranha who promptly tear him to shreds. Spring break on the lake is ramping up as the piranha continue to eat everyone they can. Throw in a parody of Girls Gone Wild and as much T&A as possible, oh and some scientists…I mean, who else is going to stop these piranhas?! So it’s up to the sheriff (Elizabeth Shue) and seismology expert (Adam Scott) to save the day. *note: the plot synopsis on Wikipedia is WAY too long for a movie like this*

I’m not above movies like Piranha (aka Piranha 3D, apparently), but I also kind of hate that movies like this exist and people pay money to see them. Poor Richard Dreyfuss, who looks terrible by the way, does he need a paycheck that badly? It’s not that I hated the film, I was expecting stupid and Piranha certainly delivers stupid but it also delivers nudity, violence, and even a few laughs. It’s a dumb movie that knows it’s a dumb movie and has a bit of fun but it’s also pointless. I’ll also say that I was shocked that no extras were killed during the massacre in the finale. I was really expecting a spring breaker to fall and kill themselves or get run over by a boat or something.

Yeah, that’s about all I can come up with.

I give it 2 mangled leg effects (warning, kind of graphic) out of 5.