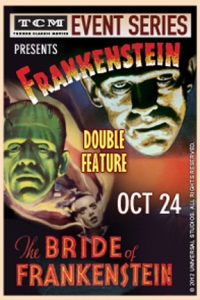 A scientist even more obsessed with creating life coerces Dr. Frankenstein to create a female creature to be The Bride of Frankenstein.

The film begins with Percy Bysshe Shelley (Douglas Walton), Lord Byron (Gavin Gordon), and Mary Shelley (Elsa Lanchester) discussing her story for the original Frankenstein. Shelley says that people seemed to miss the moral lessons she was driving at and that there was more to the story she wished to tell. The film then picks up immediately at the end of Frankenstein with the windmill burning. The creature (Boris Karloff) has survived the fire by falling into a pit under the windmill and Henry Frankenstein (Colin Clive) has survived being thrown by the creature from the top of the windmill. Soon, Dr. Pretorius (Ernest Thesiger) finds Frankenstein and shows him his miniature human creations. Pretorius wants to work with Frankenstein for creating new life. Meanwhile, the creature is on the run from the angry mob and stumbles upon a blind, lonely monk and learns to speak. The creature later finds Pretorius in a grave and Pretorius tells him that he wishes to create a mate for him.

I had never seen The Bride of Frankenstein in its entirety before and I had kind of a mixed reaction to it. On the one hand, the film is truly ahead of its time in terms of horror and even sci-fi films. Made in 1935, it sets the hallmarks for essentially every horror/sci-fi film of the 50s. Unfortunately, the film also has some very silly choices that make it veer off into comedic territory more than horror. The servant named Minnie (Una O’Conner) is basically the Jar-Jar Binks of the film; she gets way too much screen time screeching about stupid things and I found it beyond distracting. Also, when the creature is learning to talk, he also learns to smoke and drink and his voice and mannerisms are fairly hilarious, possibly unintentionally. I’m not sure how audiences reacted to these scenes originally, but the audience for the double feature thought they were hilarious – I merely found them a bit unnecessary.

The changing themes between comedy and horror in The Bride of Frankenstein are further offset by the completely archetypal mad scientist character of Dr. Pretorius. He is both villainous and cartoonish at the same time, but again, this could merely be what we are used to nearly 80 years after the original release. We have endured countless spoofs and other films that have copied a similar formula. As for the bride herself, I was kind of surprised by how little screentime she gets. Karloff is still very much the star of his film as the creature. Oh, and Dwight Frye gets yet another role as one of Pretorius’ henchman in this film as well!

I’m quite happy to have gotten the opportunity to see The Bride of Frankenstein, not only the big screen but back to back with Frankenstein. Having the films seen in tandem is hugely successful in selling the franchise as a whole (I’m not sure how The Son of Frankenstein fits in, I have yet to see that). While I’m fairly undecided about my overall feelings on The Bride of Frankenstein, I did have a great time watching it. Part of me wishes the film seemed to take itself a bit more seriously, but maybe that bit of camp has made it the huge hit that it is today.

I give it 4 Frankenstein and Pretorius creating the bride out of 5.