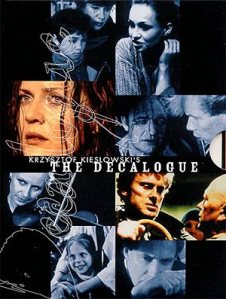 The Decalogue is a series of ten films loosely based on the ten commandments.

At a glance, it would be easy to write off Krzysztof Kieslowski’s The Decalogue as religious propaganda or something similar, but that does not seem to be the intention. This is not a heavy handed approach to religion, or even morality. Though there are ten films in the series, each film does not explicitly follow a single commandment. In fact, the series focuses more on people than religion. The films are simple but powerful and though originally shot for Polish television, they are shot beautifully. The quality of the picture is not amazing and the translation seems a bit loose at times, but once you find yourself wrapped up in the story, you likely won’t even notice these things.

Anka (Adrianna Biedrzynska) a young woman living with her father, Michal (Janusz Gajos), whom she shares a very close relationship with, almost like friends rather than parent/child. On one of Michal’s business trips, Anka decides to open a letter she finds with the writing “open after my death” on it and finds a letter from her deceased mother in it. After Michal returns from his trip, Anka reveals that she read the letter and that it explained that Michal may not be her real father and the two discover that they may have deeper feelings for each other.

While I understand the description of Decalogue IV sounds very perverse and weird, there is much more to it so please don’t be put off by something incestuous. That said, Decalogue IV is surprising in its frankness about such a relationship but that is also the mastery behind Kieslowski’s filmmaking. Never does Decalogue IV feel sleazy or reaching for a reaction, it presents a very personal relationship up close and unflinchingly but does not exploit the point. The ending will also likely surprise you. Although it is not my favorite of the series so far, Decalogue IV is a film I don’t think I will soon forget.