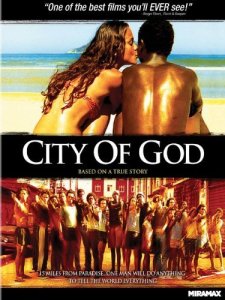 The City of God is an autobiographical tale about crime and growing up in the poor suburb of Rio de Janeiro.

Narrated by Rocket (Alexandre Rodrigues) from the 1960s through the 1980s in the impoverished and crime-ridden neighborhood he grew up in. It started with three older boys doing simple stick-ups and then a young kid, maybe around eight, named Li’l Dice (Douglas Silva) gets his start as a hoodlum and his eventual rise to power as one of two of the neighborhood’s most powerful drug lords, changing his moniker to Li’l Zé (Leandro Firmino). Somehow Rocket is able to avoid a life of time and pursue photography and tells the interweaving tale of the City of God.

Few movies impress me on both a technical level and also move me emotionally and City of God had me glued to the screen despite some of the horrific imagery. City of God is one of the most unflinchingly violent movies I’ve ever seen and yet very little blood is actually spilled onscreen. The brutality is clear and the story is all the more engrossing because of it.

It’s shocking to me that people actually live in a place like Rio de Janeiro and know nothing but poverty and crime. I suppose that isn’t limited just to Rio de Janiero, but for a city that has the potential to be simply breathtakingly beautiful to be so ugly is fascinating. City of God seems so visceral that it’s easy to forget you are watching a film and not a documentary, not unlike Battle of Algiers or Gomorrah. While the events in City of God are fictionalized to a point, the main players are real, you can look them up. I didn’t know this before watching City of God and it’s pretty amazing that Rocket (well, actually Paulo Lins, who wrote the novel City of God) even survived. I actually thought it may end up being a simple coming-of-age story until the story takes a dark turn.

City of God is a movie that I knew needed to be watched but I don’t think the praise I’ve heard has done the film justice. I was expecting a really great movie and somehow even my lofty expectations were not high enough. City of God is stunning and awe-inspiring but also almost too much to take in. While I loved it, it’s maybe even one of the best films I watched all year, it’s a film that I’m not sure I could watch very often. It’s not exactly depressing, but it’s close to it.

If you are like me and know that you need to see City of God but haven’t yet, I implore you to do it as soon as you get a chance. If you’ve never heard of City of God before now, please take my word for it and go watch it. If more movies like City of God came out around the world, I don’t think Hollywood would be the force it is today.