I have been planning a “comeback” post soon to fill you all in on what is going on in my life, but this devastating event takes precedence. I cannot adequately express my feelings on how Roger Ebert has molded my views on movies so I will just say, “Mister Ebert, I will see you at the movies”.
Ebertfest is going to mean so much more this year.

Issy over at The Filmster has come up with a great new feature that he asked me to take part in. I had a ton of fun coming up with answers to his questions and since I’m procrastinating wrapping up my 2012 posts (I just don’t want the year to be over, I guess) I’m posting it!

The WordPress.com stats helper monkeys prepared a 2012 annual report for this blog.

Huge thank you to my top commenters. Fernando, I had no idea you had that many comments here!

Here it is, December 31st and even though I’m still behind on writing my final reviews of the year I didn’t want to let 2013 be heralded in with silence on my end. You may be wondering if I made it to my goal of watching 300 movies in 2012 and I have!

There are still a few hours before midnight and I’ll probably watch another movie tonight, but I’ll keep movie #300 a surprise (unless you follow me on Facebook) until I get something formal written. I’ll also outline my 2013 goals; I’ve decided on doing something different each month, so that should be a lot of fun!

I want to thank everyone for their support this year, I have had a blast writing about movies I watch, goal or no. I wish you all an amazing 2013!

Alexander at Cinemaniac Reviews has a feature called Cinephile Reviews and he’s been kind enough to interview me. So far, he’s also interviewed A Door Into Movies and Committed to Celluloid. The interviews are all really interesting and give insight into our personalities and movie tastes.

You can read my full interview with Alexander HERE.

Also, while I have your attention, I’d like to take the time and highlight something you may have seen in my sidebar. Andy over at Rorschach Reviews held an award ceremony and I was voted Blogger of the Year! Actually, I won by a single vote so that’s pretty neat too.

I have eight more reviews to write as of right now and I still have one movie left to hit my goal of 300. I’m going to try to get all the reviews done before 2013 hits, but I’m not sure if I’ll swing that. If nothing else, I’ll do something special for #300. It’s been a crazy year and a hectic nine months since I started Andy Watches Movies so thank you all for reading and here’s to next year! 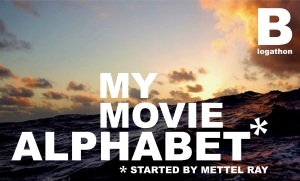 END_OF_DOCUMENT_TOKEN_TO_BE_REPLACED

Sometimes the best movie isn’t next week’s new release but a revisited classic that just can’t be contained in a Blu-ray or Netflix presentation. We aren’t talking remakes here, either. Some films were just designed for the silver screen and here are the top five we’d love to buy a ticket to see on today’s giant screens.

“Metropolis”
“Metropolis” is a German  expressionist sci-fi film from the 1920s that tells the story of a dystopian society 100 years in the future, where wealthy intellectuals rule from high office towers, while the downtrodden masses writhe away in the bellows of the urban landscape. The visual artistry of the film deserves the big screen treatment and, even though modern soundtracks have been created featuring the likes of rock legend Freddie Mercury and ’80s icon Adam Ant, what would really bring the experience to life would be the accompaniment of a full, live orchestra. This would be the kind of event that people could dress to the nines for and relive a little of that old Hollywood glamour, while paying tribute to one of the most intelligent films to ever grace us with its presence.

“Gone With the Wind”
I want to see the glory of Tara on the silver screen. The sweeping dresses and landscapes, Atlanta burning, the now-quaint, game-changing cursing of Rhett Butler – what could be more suited to a theatrical re-release? And the grand costumes that could be worn in homage to the era would make quite the red carpet splash for all those southern belle wannabes who’ve just been itching for the chance to don a hoop skirt.

“Star Wars”
Forget extended scenes or prequels – it’s the original 1977 “Star Wars Episode IV: A New Hope” that deserves another engagement at a theater near you. This is a movie that defined a generation of would-be explorers, astronauts, rebel leaders and super-geeks. Not only was the film groundbreaking for its special effects, but it introduced the space opera genre and changed the face of not only science fiction but modern hero mythology as well. Throwing this flick back up on the big screen would be perfectly timed with the Disney buyout of Lucasfilms and could help prompt excitement of what is coming next for the franchise.

“Moulin Rouge”
Baz Luhrmann knows how to make eye-candy. That’s why this rich carnival of sequined sights and exuberant sounds deserves another trip to the big screen. Imagine every sparkle and spangle in HD and each warble from the lovely throat of Ewan McGregor or Nicole Kidman in Dolby Digital Surround Sound – doesn’t the thought alone make your heart swoon? There’s no way even the most well-placed flat screen TV above the mantel can do justice to this cinematic gem that deserves its due in a full-fledged theater. Actual velvet theater seats would be the cherry on top.

“Casablanca”
Sam should definitely play it (again), and on the biggest screen with the most amazing digital re-mastering available. Nothing could be more painfully beautiful than the face of Ingrid Bergman floating above us on a beautiful screen as she’s forced to fly away from the love of her life – the incomparable Humphrey Bogart. This classic film from the golden age of Hollywood doesn’t require flashy special effects or the latest in sound innovation to keep viewers rapt with its tale of star-crossed lovers who, like Romeo and Juliet, must ultimately say goodbye. But that doesn’t mean a theatrical re-release wouldn’t be one of the most wonderful things Santa could bring us for Christmas this year.
[Ed. note – I actually got a chance to see Casablanca on the big screen, you can read my review here]

What film would you like to see come back to the theater?

About the Author:  Lisa has been writing for Satellitetv.com about film and TV related topics for over a year now.  She loves that she can incorporate things she loves with her work.

Hi everyone – I’ll be on vacation but don’t worry, I’ve got some posts scheduled. I’ve been struggling through my email backlog to catch up on all your sites before I leave, but I’m going to get buried all over again while I’m away. Don’t fret, I will make it through them eventually. Also, my comments/replies will be delayed here while I’m away, but I’ll do my best to stay on top of things.

I hope to come back with a few pictures and stories to share!

I’m sure many of you may already read Isaacs Picture Conclusions and his series of interviews, but if you don’t check him out HERE!

This week, it was my turn to be asked the burning questions and you can read it by checking out Isaacs Interviews – Andy Watches Movies

It was a lot of fun taking part in the interview and a huge thanks to E over at The IPC for interviewing me.