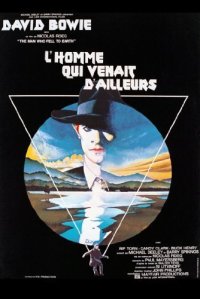 The Man Who Fell to Earth is about an alien that travels here to transport water back to his dying planet.

Thomas Newton (David Bowie) is an alien that travels to Earth for water after a drought has ravaged his home planet. Since Newton looks just like a human, he blends in perfectly to society, and uses his advanced technology to file numerous patents and become extremely rich. With his amassed wealth, Newton needs a space to build a spaceship to transport water back to his home planet. He meets a young girl named Mary Lou (Candy Clark) and she teaches him Earth customs.

I would normally give a slightly longer synopsis of the film, but that’s about all I could surely surmise from The Man Who Fell to Earth. Calling the movie “trippy” is almost an understatement since at times I found it totally incoherent. Even at its most esoteric, I never found The Man Who Fell to Earth painful to watch, but it has more than a few moments that had me saying “wtf?”.

Since this was David Bowie’s big screen debut, it’s worth noting that his performance as a slightly robotic alien is fairly unsurprising. Oh, and in case you ever wanted to see naked David Bowie, this is your movie. Even though I barely had a grasp of the plot, I think a lot of The Man Who Fell to Earth actually has more to it. I would normally say it would be worth watching again to try to discern more of what was going on, but I’m not sure if I’ll ever be up for that.

The Man Who Fell Earth is not a bad movie, there is still a lot to like, especially given the cult status the film has achieved since its release. I have seen many many movies in my time, and The Man Who Fell to Earth is something unique, albeit very strange.

I give it 3 David Bowie taking out his contacts out of 5.

END_OF_DOCUMENT_TOKEN_TO_BE_REPLACED

Movie One Hundred Thirty One

The Prestige is about two rival magicians each trying to outdo the other and learn the secrets of their greatest tricks.

The Prestige starts with Alfred Borden (Christian Bale) standing trial for the murder of Robert Angier (Hugh Jackman). We then find out what brought the two men to this point, as we see them as young assistants for a magician. One trick goes bad and results in the death of the magician’s assistant, who is Angier’s wife. The two men become rival and enemies continuously trying to one-up the other in terms of showmanship and difficulty of tricks. This ultimately causes Borden to lose two fingers and Angier hurting an audience member and damaging his reputation. This rivalry culminates over a trick called The Transported Man, where Angier travels to find Nikola Tesla (David Bowie) to learn Borden’s secrets. At what cost will these men find out the truth?

Simply a masterful film by the Nolan brothers, once again. The Prestige not only keeps the audience guessing and even better, questioning what we are seeing. Since the film deals with magic tricks it is very easy to assume that everything we see may simply be a sleight of “hand” by the Nolans and even after multiple viewings the whole picture is not abundantly clear. The inclusion of Tesla as main character certainly makes me wonder how much of The Prestige is actually about Tesla and Edison’s feud using the guise of magic for the film.

While at the time of release, it might have been easy to miss The Prestige due to another film about magicians (The Illusionist, which is also fairly good). Now that both Christopher and Jonathan Nolan have secured themselves as powerhouses in cinema, The Prestige happens to be one of their best films. Not as outright confusing as Inception or Memento, it still packs a psychological wallop that will cause you do rethink everything you just viewed. The Prestige is a fantastic film that cannot be missed.