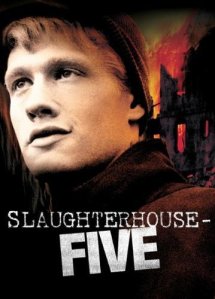 Slaughterhouse-Five is the story of a man who serves in World War II and then is abducted by aliens and becomes “unstuck” in time, based on the novel by Kurt Vonnegut.

Billy Pilgrim (Michael Sacks) is a soldier during World War II and survives the fire bombings in Dresden. After the war, he marries Valencia (Sharon Gans) and becomes a successful eye doctor. Sometime later, he is abducted by aliens from Tralfamadore and kept in an exhibit with a beautiful celebrity, Montana Wildhack (Valerie Perrine). The Tralfamadorians do not have the same concept of time that we do, and Billy learns to time travel through his entire life at any point. Due to this, the film jumps back and forth between events in Billy’s life after World War II.

Recently, I finished reading Slaughterhouse-Five by Kurt Vonnegut and firmly decided to see the film version. As far as book adaptations go, Slaughterhouse-Five is very fair to the source material in many ways, but the small touches are lost. Sometimes the small touches go a long way, for instance, every time someone dies in the novel, Billy remarks “so it goes”. That line isn’t spoken once in the film, despite numerous mentions in the novel. As a result, the film, if viewed as its own entity, does not have the charm or identity the novel has.

I was surprised at how well Slaughterhouse-Five translated to the screen, I was having a hard time picturing how a film where time travel is so frequent could be anything but a confusing mess, but the cuts in the film between periods are well thought out. I never had any question as to when Billy was or even where he was, but that could be attributed to my knowledge of the plot from the novel. The actors playing the characters were all as I imagined them and they all perform quite well.

I give it 4 Tralfamadorian exhibits out of 5.