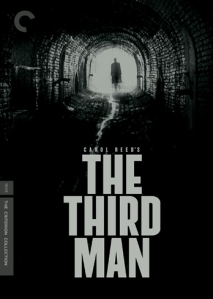 In The Third Man, a pulp novelist travels to Vienna to visit an old friend but winds up investigating his mysterious death.

Holly Martins (Joseph Cotten), an American pulp fiction writer, travels to Vienna, Austria to visit his friend Harry Lime (Orson Welles) who has offered Martins a job. Upon arrival, Martins finds out that Lime was killed by a car while crossing the street. Martins attends Lime’s funeral and meets some policemen and a man named Baron Kurtz (Ernst Deutsch) who says that he and another man carried Lime across the street after the accident.Lime’s apparent dying wish was for them to take care of Martins and Lime’s girlfriend, Anna (Alida Valli). After visiting Anna, Martins begins to suspect something is amiss with Lime’s death as the doorman tells him that Lime died instantly and that three men carried the body, not two. Martins then digs deeper into Lime’s supposed death to find the truth about Lime and the identity of the third man.

I have never quite seen a film quite like The Third Man before or since watching it. The film follows many great pulp/noir films but what really sets The Third Man apart is the score. Composed by Anton Karas, the entire score is made by a zither, which almost adds a comical whimsy to the serious nature of the film. If you’ve seen an episode of the cartoon Spongebob Squarepants, the soundtrack is almost reminiscent of that. The first time I watched The Third Man I was highly distracted by the soundtrack while watching but after the film had ended and I was still putting all the pieces together, I really appreciated the story. The second time through the music wasn’t distracting, but it still made me smile which seems almost morbid.

The plot of The Third Man was a bit confusing to me since it deals with crossing paths and deception, but that also plays into the film’s strengths. We don’t know Lime’s secrets and as we learn them it almost makes it unsure what is real and what is fabricated by Lime. Welles is perfect for the role, though he has minimal screentime for the high billing he receives. All the other actors shine just as bright, but Welles just has such charisma.

While I have the Criterion version of The Third Man pictured, it has lamentably been discontinued and publishing duties have been given to Studio Canal. The reason I point this out is because even on blu-ray, Studio Canal’s treatment of The Third Man is not great on a whole. The soundtrack is uneven, there were times when it was like the zither was on full-blast, but for the most part it was OK. I wish I had the gumption to get the Criterion, but I don’t feel like spending over $100 on one. I wouldn’t dissuade buying Studio Canal’s treatment, but I wouldn’t fully recommend it either.

The Third Man is a film that doesn’t fall neatly into just one bucket. It is mostly a pulp/noir mystery, but the score lightens the tone of the film and gives it a life all its own. With a different score, The Third Man wouldn’t be the same movie, I’m not sure for better or worse. If you haven’t seen The Third Man by now, I strongly recommend it. In fact, I recommend watching it a few times if you find the soundtrack too jarring at first.