Today was so huge that I decided to split it into two posts (part two should be up tomorrow). Ebertfest is coming to an end and the last full day gave us four incredible movies, all of which were surprises to me. 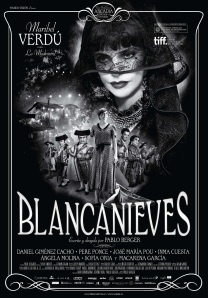 The first movie of the day was Blancanieves, which translates to Snow White, but this is not the standard Grimm fairy tale. It’s a mix of several stories, but is largely true to the original story other than the Spanish bullfighting elements. In our post The Artist world, it’s impossible to immediately compare Blancanieves to any other film, but other than being silent films made in the past few years, they are really not that similar. There are very few films that manage to have as much heart pouring out of every frame of film as Blancanieves. While a bullfighting Snow White sounds ludicrous and maybe even a bit pointless, I was quite moved by all the characters on screen. The soundtrack, arguably the most important aspect of a silent film – doubly so for most audiences now – is also splendid. We were joined by Pablo, the writer/director, who stated that this film took 8 years to make. Considering he has 3 credits (including this) on IMDB, I’m not surprised but I hope to see more. Be sure to watch his session in the archive link at the bottom of this post. While Blancanieves was a hugely pleasant surprise and a great opener for today, the day only got better, which I didn’t think would be possible.

Next, we were presented the outrageous documentary called Kumaré. Kumare is the fictional alter ego of director Vikram Gandhi. Much like Blancanieves and The Artist, it’s impossible not to compare Kumaré to Borat. However, the difference between Borat and Kumaré, is that Kumaré is not out for laughs but still has many. Vikram decides to see if people will follow anyone calling themselves a guru and if he can get people to believe in him as well as believing in themselves. While this social experiment sounds a bit cruel on paper, it’s easy to see how much guru Kumaré makes a difference in the lives of these people. It’s not inherently cruel and these subjects are most definitely not stupid or gullible. Vikram plays a very convincing guru, whether he wants to admit it or not. We end with these people having their lives changed for the better, and how they take the news of finding out their leader is not who they think. Where Borat relies on cheap laughs and offensive jokes, Kumaré is funny in a simple understated way, making it much more fun to watch. We were joined by Vikram, the director and star, as well as a producer. Be sure to check it out!

Stay tuned for more coverage including my favorite movie of the festival!